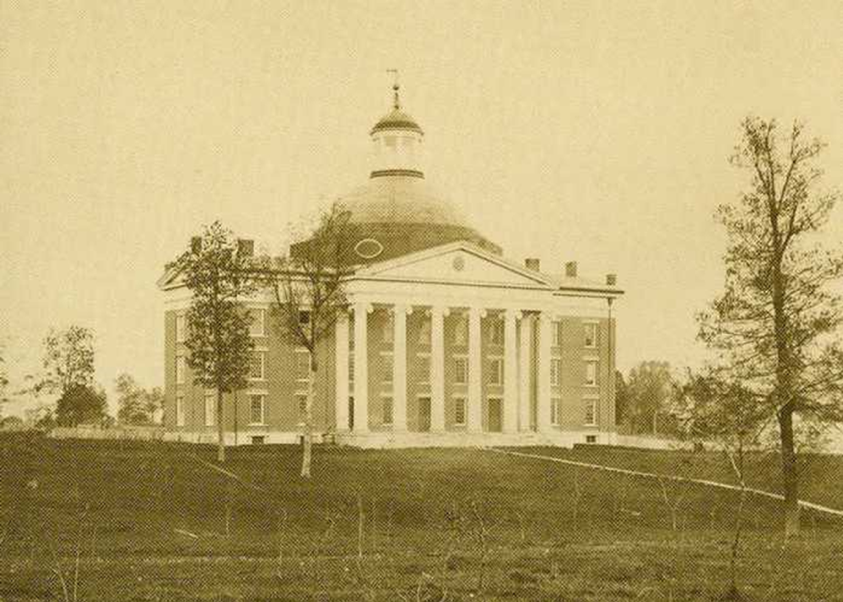 In order to establish the public school system and the University of Missouri, the Missouri State Legislature passes the Geyer Act. 900 citizens of Boone County pledge $117,921 ($3.2 million in 2018) in cash to locate the new school in Columbia. They win the bid, and the university becomes the first public school west of the Mississippi River and the first in the Louisiana Purchase.

Pictured is Academic Hall, the original main building on the University of Missouri’s campus. It burned down in 1892 due to an electrical fire, leaving only the stone columns standing. These columns still stand today as a symbol to the perseverance of the University. 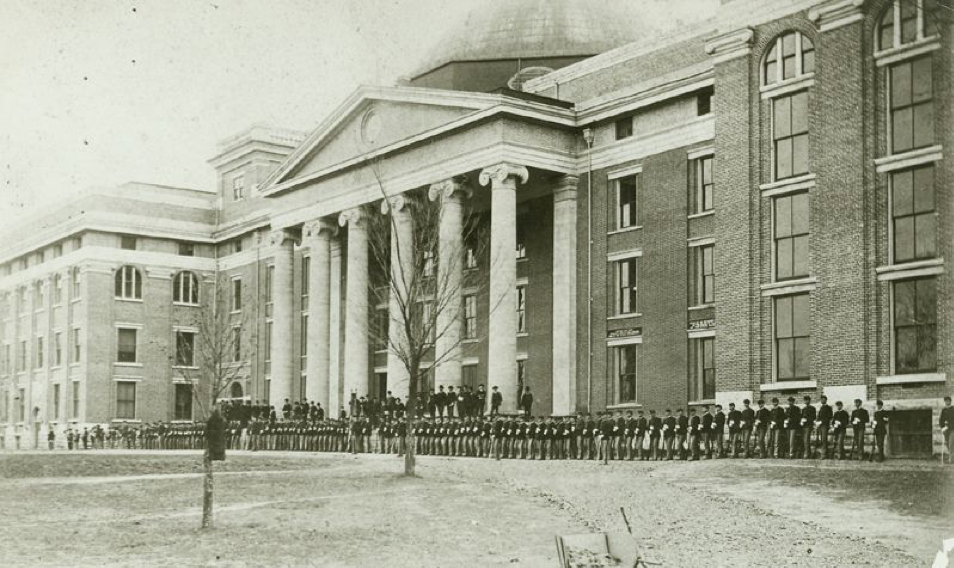 The American Civil War began in 1861 with the battle at Ft. Sumter, and quickly spread across the States. The 2nd Missouri Volunteer Cavalry under COL Lewis Merrill garrisoned the school in January 1862, taking residence in the first floor of Academic Hall (pictured.)

In August of that year, 200 Confederate soldiers under the banner of the Missouri State Guard stormed Columbia, and were routed by Merrill’s men. The third floor of Academic Hall was utilized for holding prisoners for a time.

During this occupancy, some Union soldiers infamously found a box of blank diplomas and awarded themselves degrees, holding their own commencement. 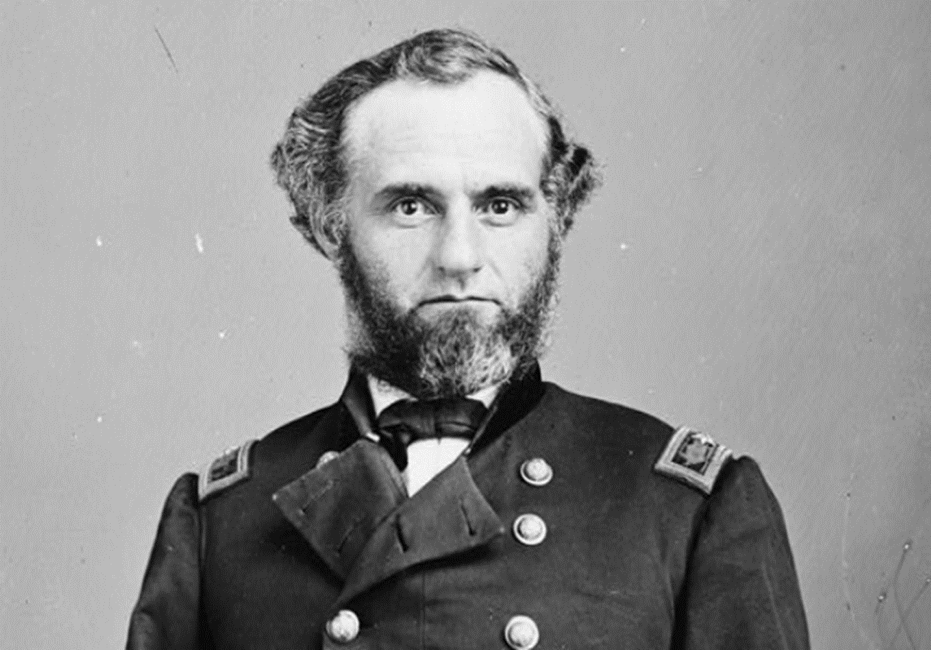 In 1862, Congress passed the Morrill Act to provide states with federal land for colleges in order to promote architectural, engineering, and military studies nationally in institutions of higher learning. MU was one of the first fifteen schools to adopt the act, and in compliance with the military education requirement they established the Missouri Military School in 1868. The following year, the Board of Curators passed a rule requiring all students of the University to enter the Military department unless excused by a vote of the faculty on the recommendation of the Professor of Military Science.

Major General Richard W. Johnson (pictured) was the first officer assigned to the school, and began formal instruction in 1870. 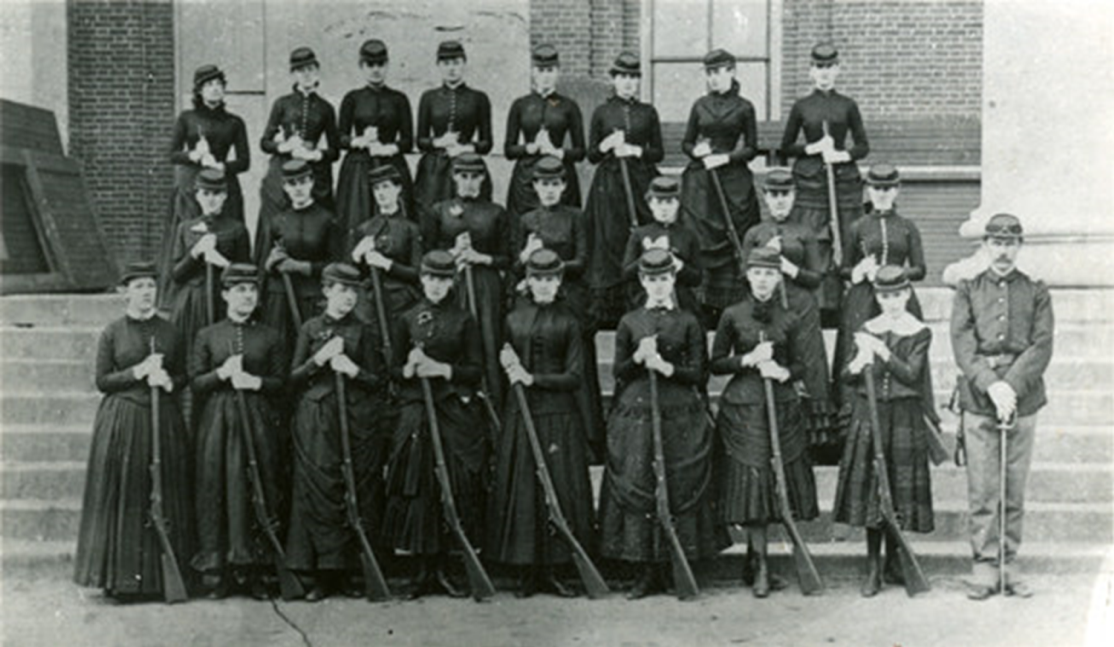 In 1885, newly commissioned 2LT Enoch Crowder was assigned the Professor of Military Science role at the University of Missouri. He only instructed for one year, going on to do great things with his Army career, but in that short time he left a massive impact there.

Receiving petitions from over 100 women students at MU, LT Crowder founded the Ladies’ Department Drill Company. It was the first such organization in the nation, and found frequent competitive success. Pictured is 2LT Crowder with the very first iteration of the Company. 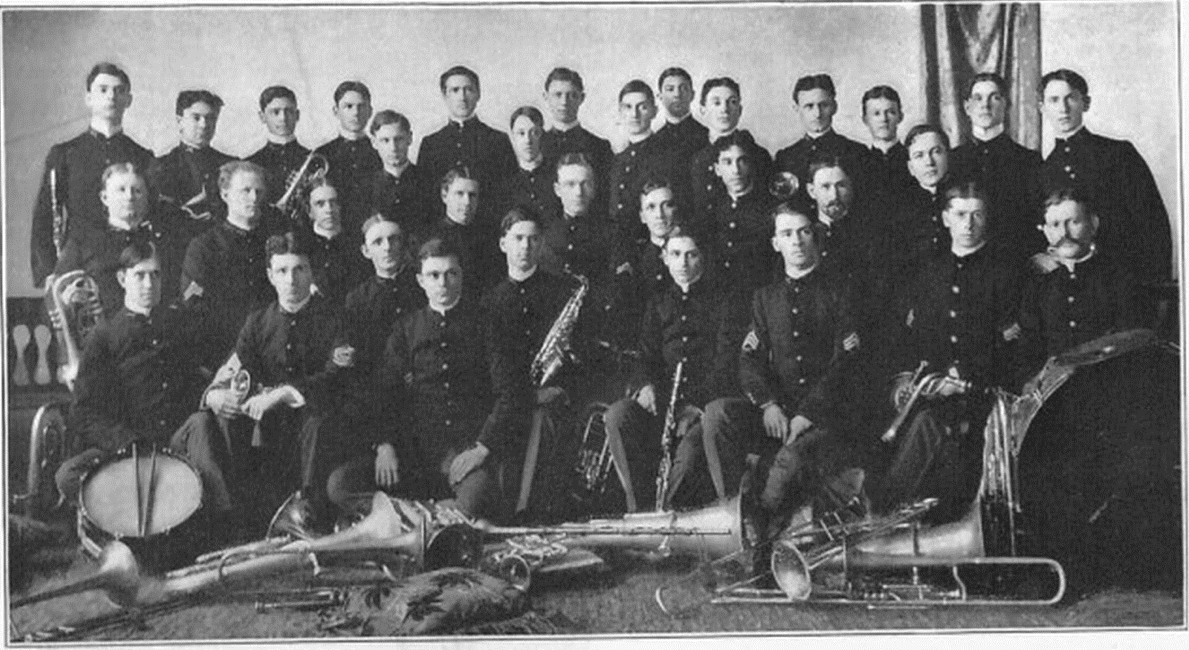 The other major impact LT Crowder had on Mizzou was through the creation of the Cadet Band. This band was headed by Professor Frederick Pannell of the Music Department, and was intended for use with reviews and public occasions. It became, over time, the band now known as Marching Mizzou. Pictured is the 1904 iteration of the Cadet Band.

LT Crowder obtained a law degree from MU while he was instructing, and went on to eventually be promoted to Major General. He would eventually serve as the Judge Advocate General of the United States Army, as well as Provost Marshal of the Army. While in the post of Provost Marshal, he wrote the Selective Service Act and supervised the draft. 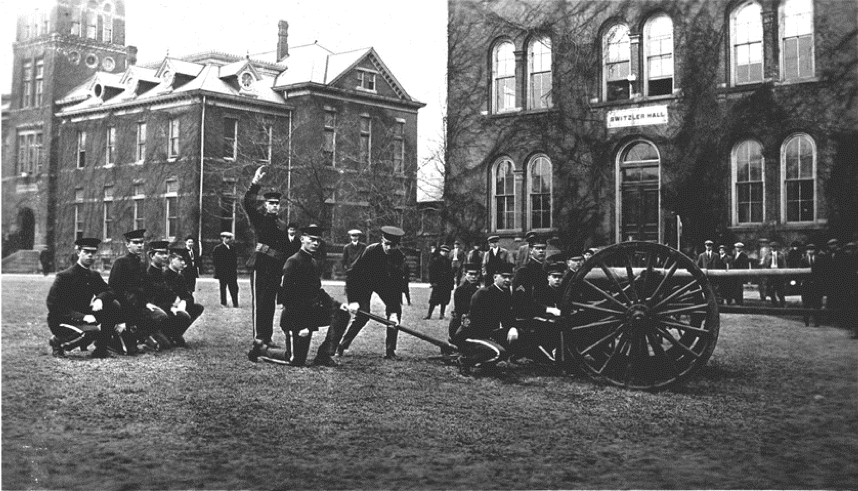 In 1895, following a football game against the Nebraska Bugeaters in Omaha, Mizzou Cadets fired off their cannon, beginning the long and proud tradition of the Cannon Crew.

The Cannon Crew has taken many different forms over the years depending on equipment available. The top picture is “The Firing Squad” in 1912, the earliest rendition of the Cannon Crew. Below it is the 1943 Cannon Crew with their 105mm M2A1 Howitzer. 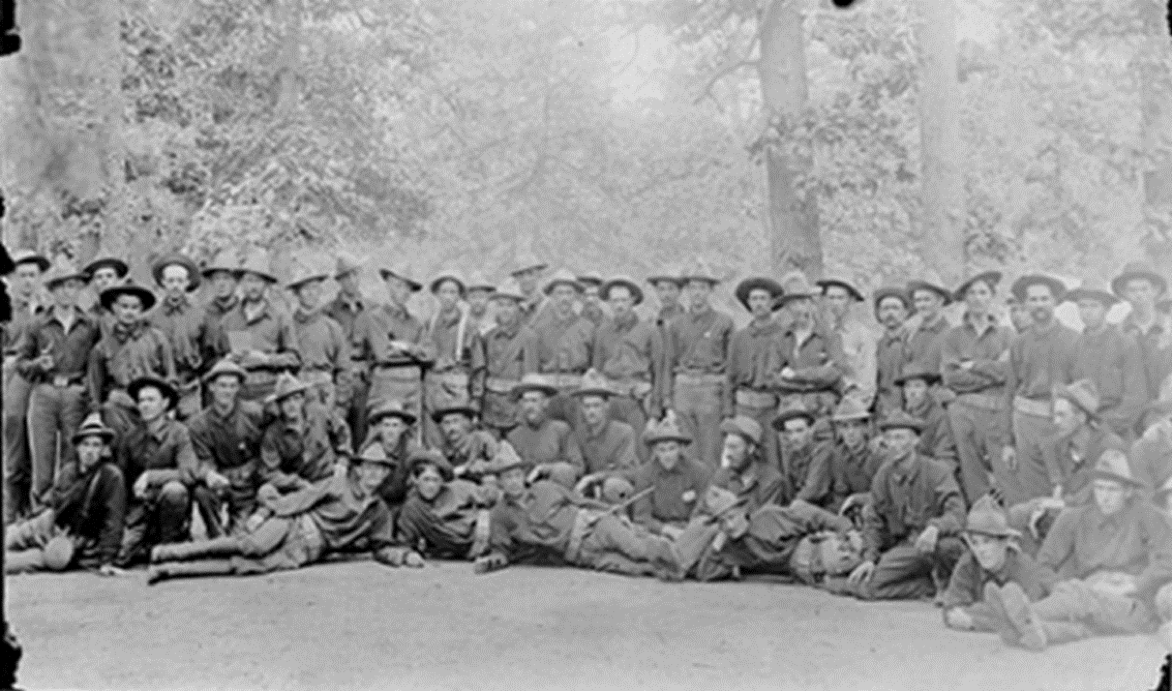 In February of 1898, the USS Maine mysteriously sunk in Havana Harbor, forcing President McKinley into intervening in the Cuban war for independence and declaring war on Spain. May of that year saw Company I of the 5th Missouri Volunteer Infantry training for an invasion of Cuba. Company I, nicknamed “The University Company” for its large proportion of MU undergrads, alumni, and former students, had its entire leadership made up of Mizzou undergrads.MU sent a larger proportion of its undergrads into service than any other school in the nation during the war. Pictured is University Company training at Chickamauga, GA. 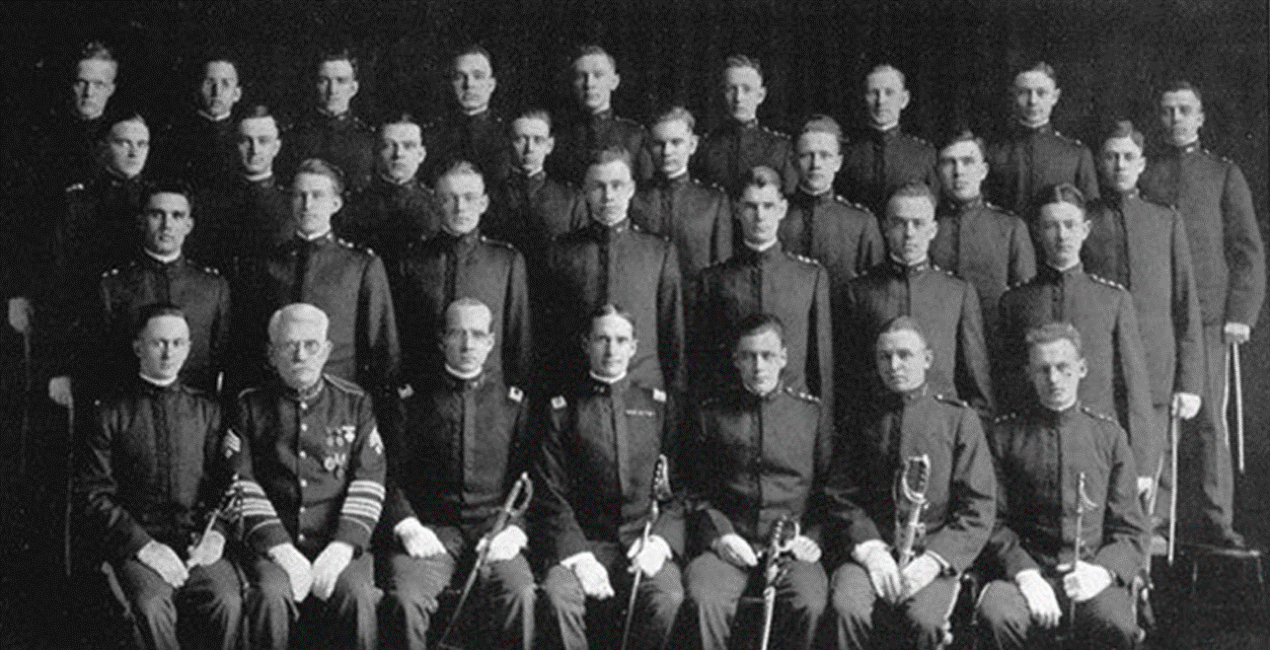 In early 1916, a law was passed called the National Defense Act which expanded the Army in a multitude of ways, one of which was the creation of the Reserve Officer Training Corps. This act was a response to the Preparedness Movement, led by retired President Theodore Roosevelt and Army Chief of Staff Leonard Wood, and intended to brace the United States for World War I.

Previously, military instruction had focused on drill and rudimentary military skills. With the new ROTC program, tactics and military science were taught at a much higher level. Here we have the very first picture of ROTC Cadet Officers with their cadre, in 1917.

Early in 1917, the United States officially joins World War I. Many MU students and faculty left their regular lives for military service. Some dorms were repurposed as barracks during training events. 48 students volunteered for the American Ambulance Field Service in France, with almost half paying their own way there. Despite all of this hardship, the ROTC continued producing officers.

The Student Army Training Corps was established during this time to provide better-trained soldiers for the Army, and in 1918 MU received a chapter. Soldiers would take college classes as well as receive military instruction, and those that did well were recommended for further instruction in ROTC. Pictured is the first SATC training staff from 1918. 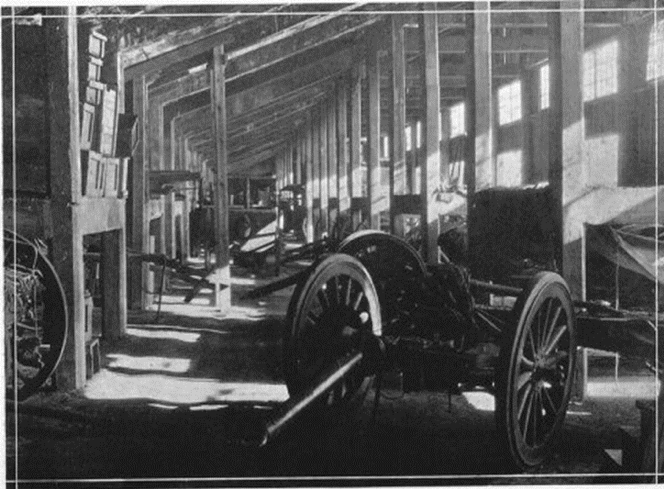 Above on the left is pictured the equipment used for training by Field Artillery Cadets in 1923. On the top-right, Mizzou cadets win first in firing at Camp Knox in 1923. In the bottom-right, Mizzou Infantry cadets march at Ft. Snelling 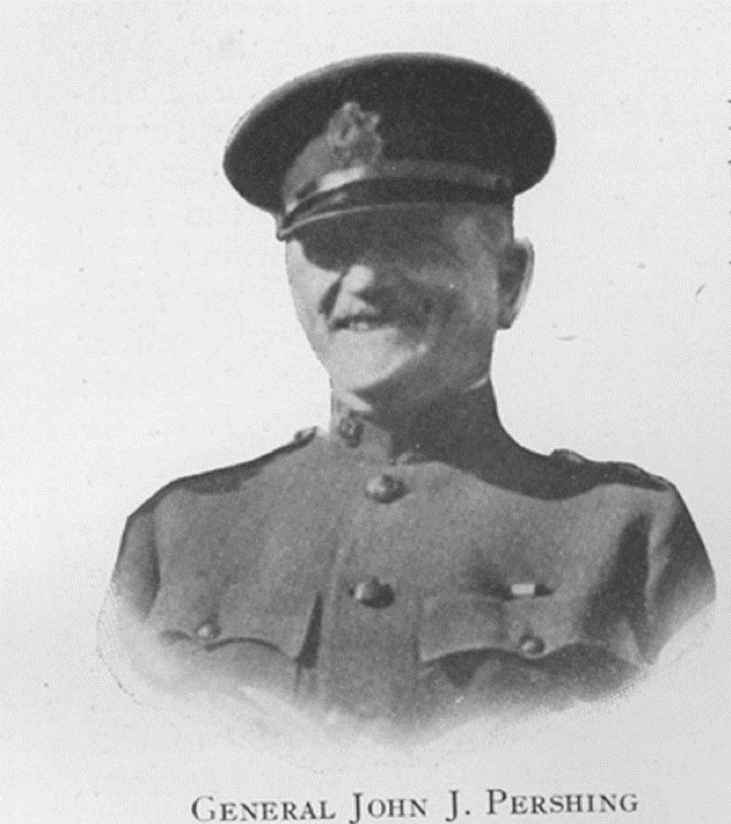 General John J. “Black Jack” Pershing was a native Missourian who was very influential in US military history. He served as the commander of the American Expeditionary Forces during World War I and held the rank of General of the Armies. In 1920, the University of Missouri bestowed both General Pershing and General Enoch Crowder with honorary degrees.

No
1921: Pistol and Rifle Teams Formed 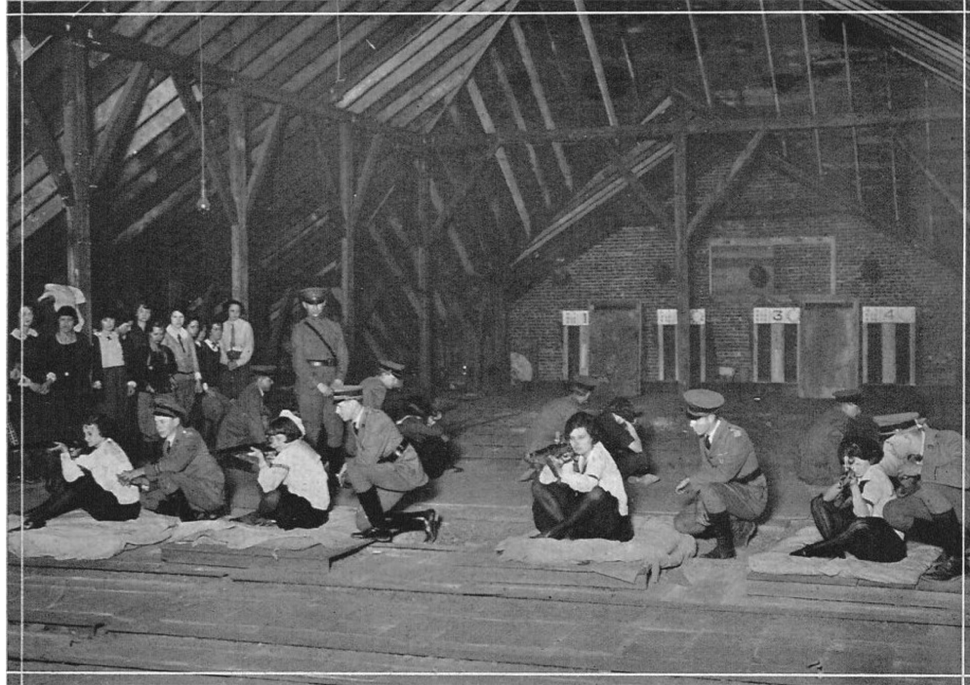 To the left is the 1921 national championship trophy, and on the right the 1923 Girls’ Rifle Team practices in their indoor range in the attic of Jesse Hall. 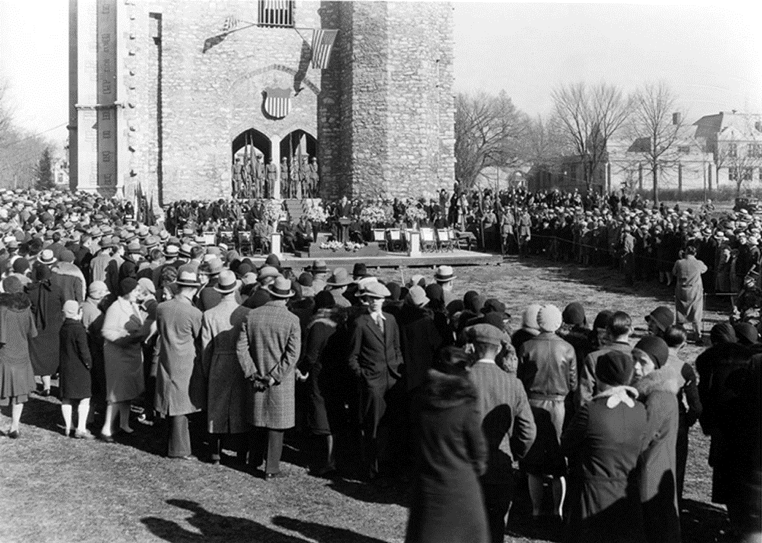 In 1921, a campaign was begun to raise funds for a student union that also doubled as a war memorial for students and faculty who lost their lives in the Spanish-American War and World War I. Memorial Union began construction in 1923, and was completed and dedicated in 1926. The Memorial had engraved underneath the arches each of the 117 names of those students and faculty in the aforementioned wars, and was expanded to include 338 names from WWII. For years to come, Cadets would march hours under the arch as a rite of passage and a solemn tribute. Pictured is the day of the building’s dedication in 1926.

The building was originally planned with two additional wings, one northern and one southern. The North Wing wasn’t completed until 1950, a chapel added in 1959, and the South Wing finally finished in 1962, about 50 years after the original groundbreaking!

In 1929, Polo was one of the most popular and oldest team sports in the world. It was still an Olympic sport at the time, and had been played for at least 50 years in the United States. MU started its first Polo Association in 1929 but due to a lack of equipment could not participate in any matches until 1932. The Association members had to be ROTC cadets, since the horses were government-owned. The Polo Team won the Big Six Championship in 1936. Pictured is the 1929 Polo Association.

No
1930: Tiger Battery and Pershing Rifles

General Pershing began a group called the National Society of Pershing Rifles in 1894 to help drill Infantry ROTC units across the nation. In 1930, MU opened its first Pershing Rifles chapter. The Tiger Battery was organized by the Artillery Unit of MU’s ROTC in 1930 to be a well-drilled competition team as sort of an Artillery counterpart to Pershing Rifles. Pictured is the 1931 Tiger Battery. 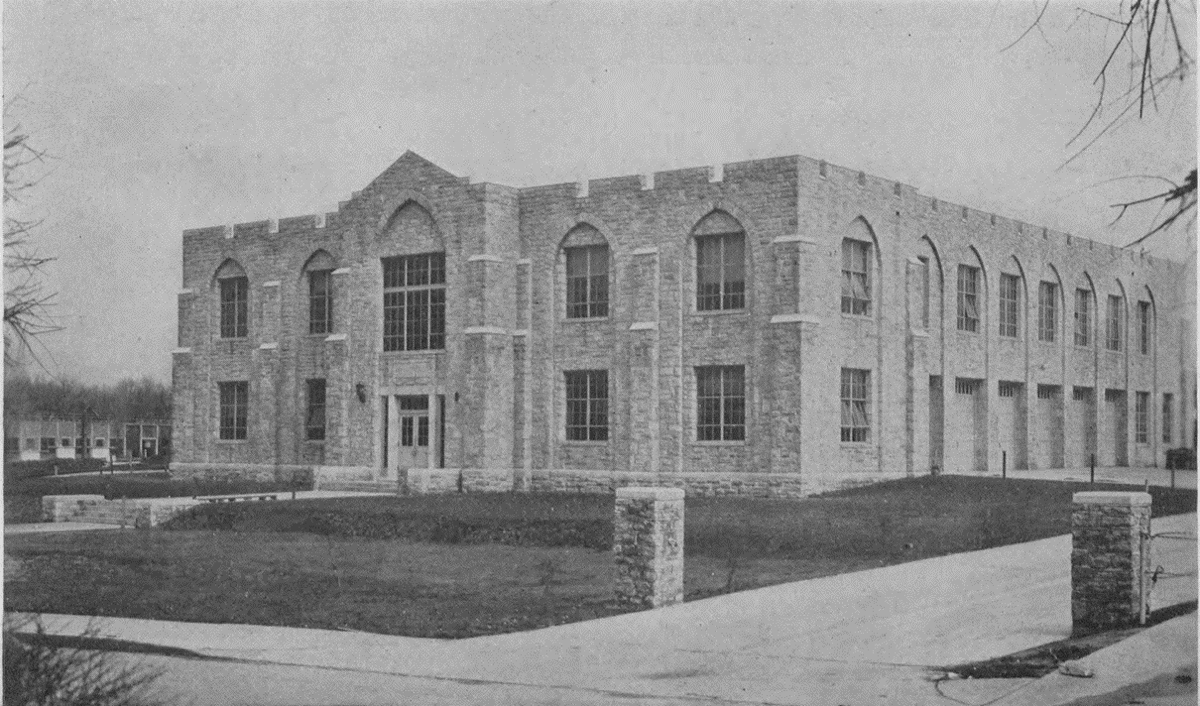 Pictured is Crowder’s original configuration; over time, there have been four more major construction projects modifying the building.

In the 1920s and 30s, MU’s Army ROTC program was regularly rated as one of the most efficient across the nation, but the staff felt that they could better the program if they had a unit armory. 1938 saw the approval of construction for an armory at Mizzou, with the intent of housing a motorized artillery unit there. The building was completed later that same year, and dedicated after the legendary General Enoch Crowder on May 10, 1940. 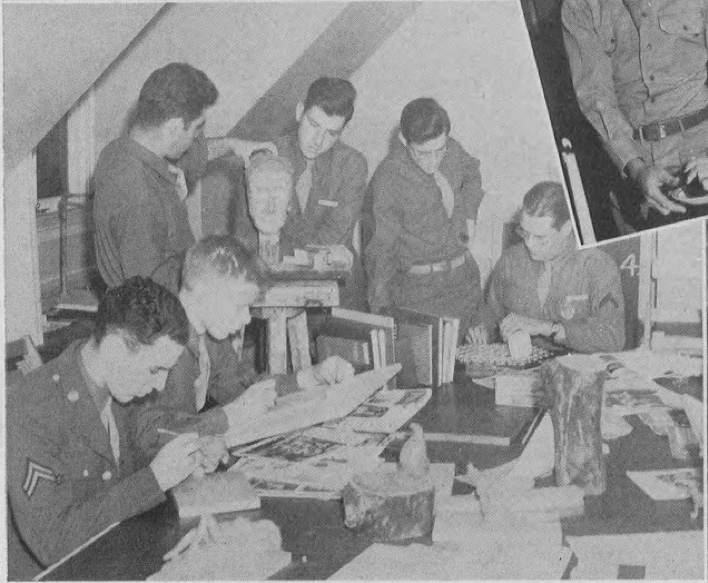 The involvement of the United States in World War II brought about major changes on campus. To start with, attendance dropped to around 1,500 by 1943, having lost 70% of their student body size from 1938. This was mostly due to students (and faculty) volunteering to leave school and enlist, getting drafted, or helping serve the war effort in other ways. For this reason, ROTC lost the Advanced program and begun commissioning out of the Basic program.

Additionally, in late 1942 the Army Specialized Training Program was brought to Mizzou. This was a program designed to send soldiers (many former undergrads themselves) to a school to study technical specialties crucial to the war effort. These students used dormitories and some requisitioned fraternity houses as barracks until the program was shut down in 1944. Pictured are ASTP students studying in Read Hall.

No
1965: Freedom to Choose Branches 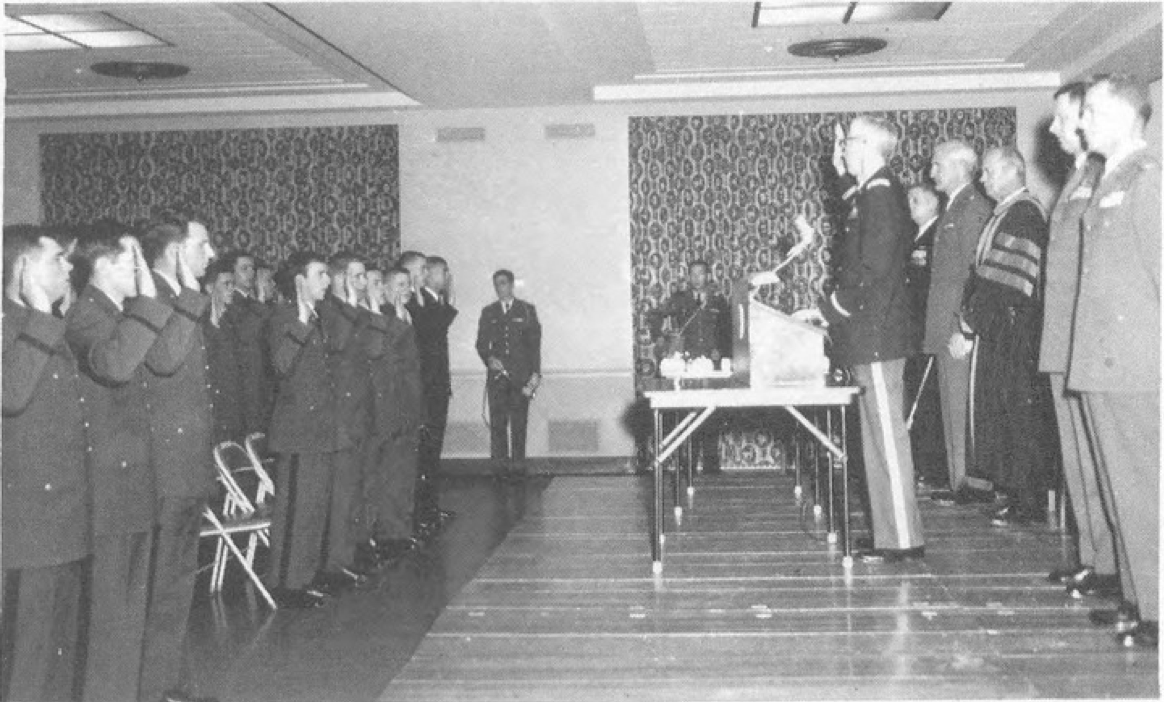 In 1965, the United States began fighting in Southeast Asia against the North Vietnamese. This year brought about many changes to ROTC programs across the nation, including allowing cadets to compete for whatever branch they choose. Pictured is one of the first commissioning classes with this freedom, the class of 1967.

Also in 1965, MU lifted the compulsory ROTC participation requirement, meaning that the only cadets participating did so voluntarily. 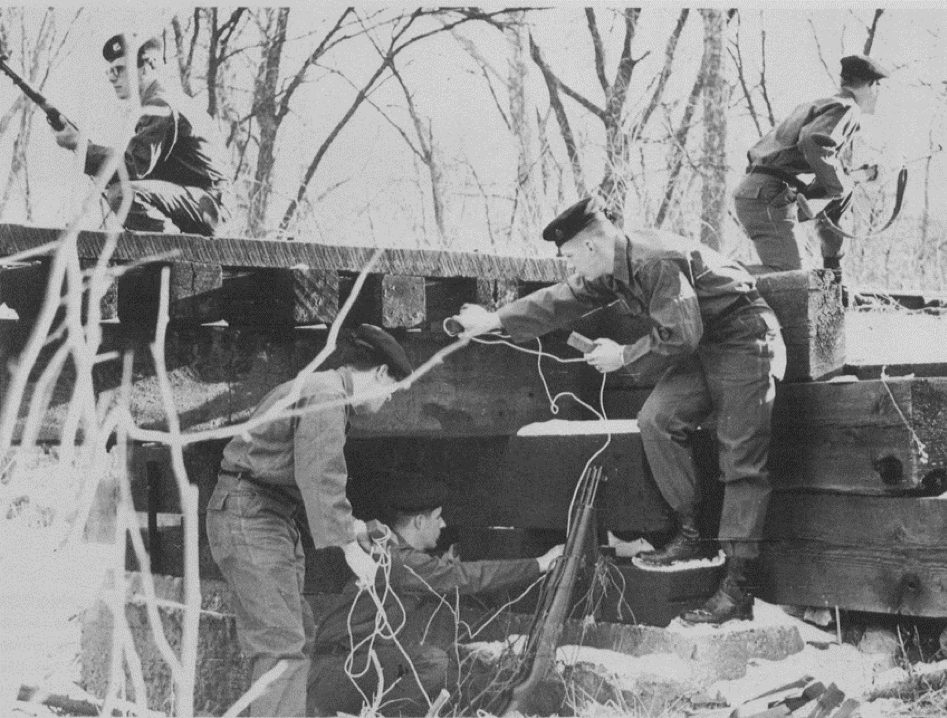 As the Army moved from conventional tactics to fighting a guerrilla force, ROTC training began to adapt to the same. Unique to the University of Missouri, Army ROTC created a company in 1966 dedicated to tactical learning called the Black Berets. Pictured on the left are Black Berets learning the process of using demolition charges on a railroad trestle in 1966; to the right is a Black Beret on patrol in 1969. 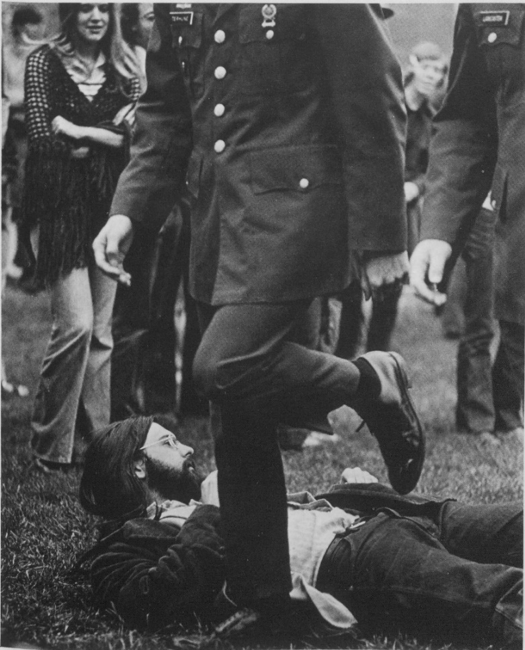 In the late 1960s and early 1970s, thousands of students across the nation protested against the United States’ involvement in Vietnam. This tended to involve picketing and rallying, making public demonstrations (usually against the military) the popular means of influence.

Mizzou was not exempt from these cultural occurrences, and the ROTC made for an accessible, on-campus target. This frequently disrupted ROTC activities, but never escalated to violence. Pictured is a demonstration occurring in the middle of an ROTC activity on the quad. 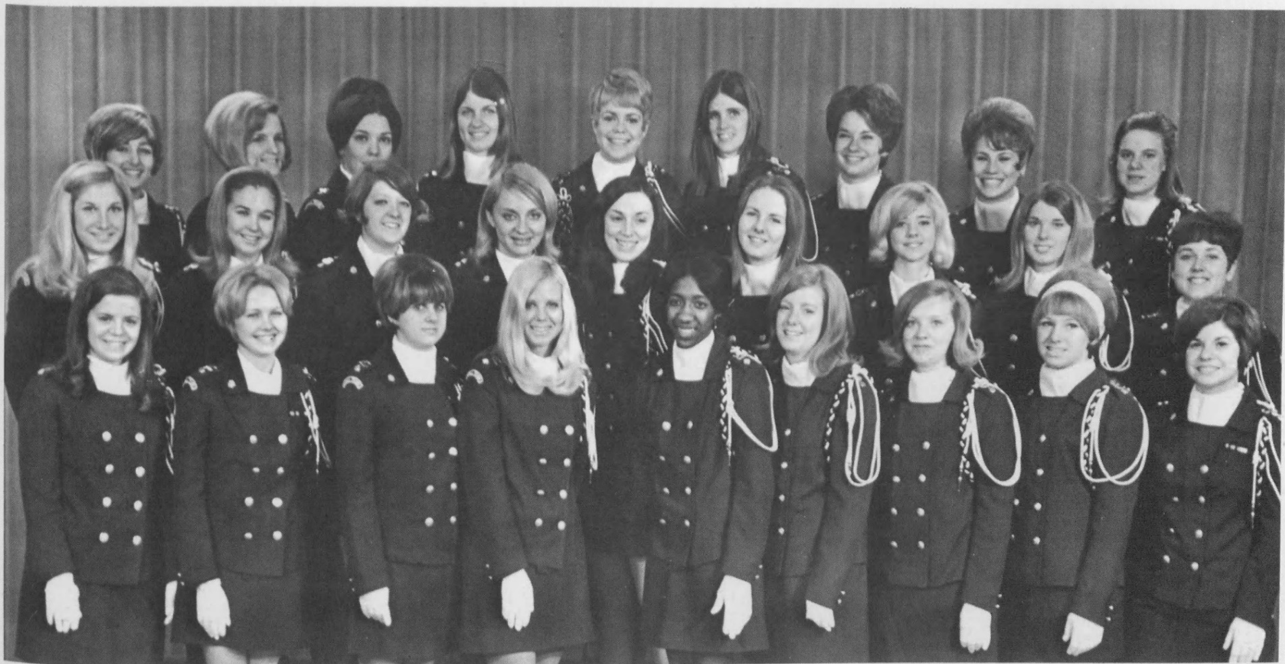 In 1970, a student organization was created to serve as a women’s auxiliary to the Army ROTC called the Brigadiers. This organization served as a competitive drill team and participated in campus and civic service projects. Pictured is the original 1970 iteration of the Brigadiers.

In 1973, the Army began to allow for women to fully join ROTC and compete for scholarships.

Chris Gillette (Kutz) was the first woman to commission through MU’s ROTC, commissioning into the Quartermasters in 1976. 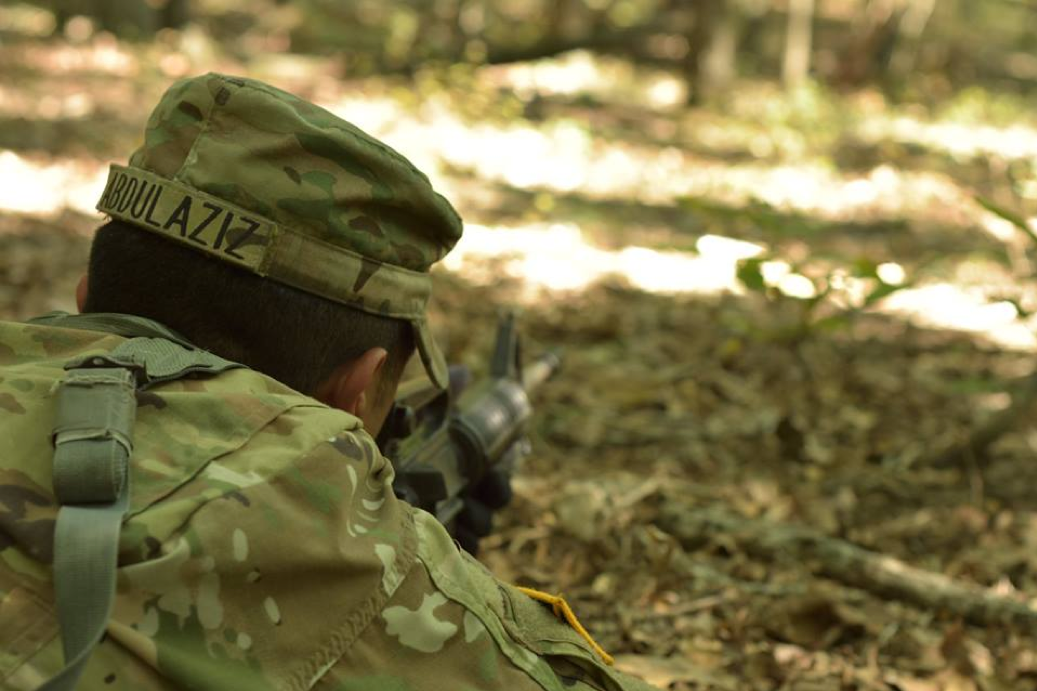 We prepare to stay integrated with the newest technologies, but continue to train to proficiency on the tried and true methods.

At the end of the day, the core competencies of today are not so different from our past. 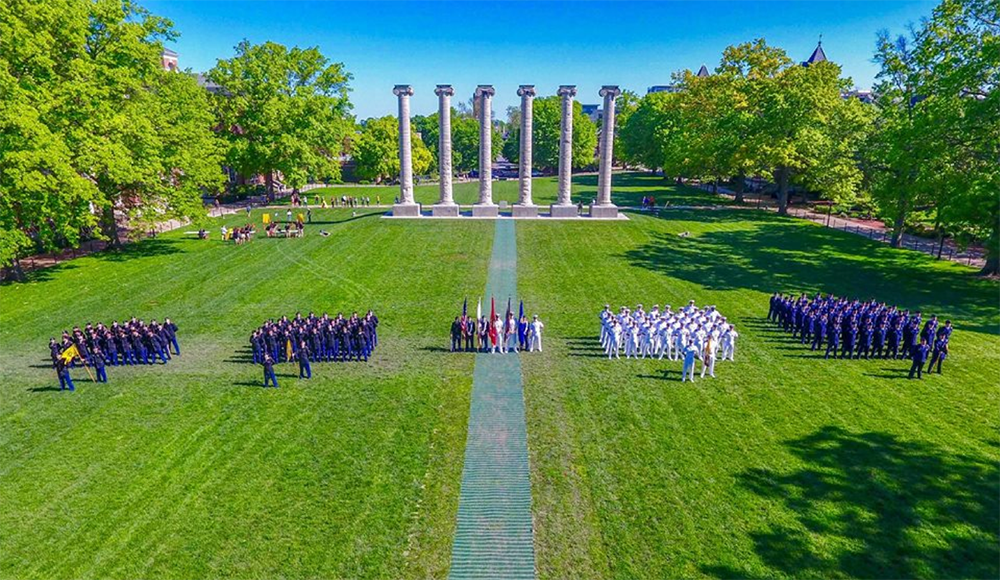 Throughout our history, one thing has stayed constant.

Our integration with the university and our special place on campus, Francis Quadrangle.